Pompeo Warns That Iran’s Missile Program Is ‘Out Of Control’

Pompeo Warns That Iran's Missile Program Is 'Out Of Control' 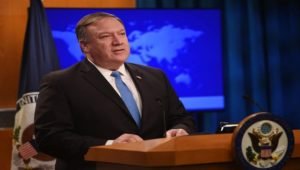 Pompeo Warns That Iran’s Missile Program Is ‘Out Of Control’

Secretary of State Mike Pompeo was at the U.N. Security Council today to sound alarms about Iran’s missile program. He also called for an end to Iran’s support of militant groups around the Middle East. But some U.S. allies and regional analysts worry that the administration’s pressure campaign could create a conflict. NPR’s Michele Kelemen reports.

MICHELE KELEMEN, BYLINE: The Security Council was meeting to discuss the resolution that enshrined the Iran nuclear deal, the one the Trump administration left even though Iran was abiding by it. Pompeo says the deal failed to address other concerns about Iran’s bad behavior in the region and its missile program.

MIKE POMPEO: The United States made clear that Iran’s ballistic missile activity is out of control. Iran has been on a testing spree and a proliferation spree, and this must come to an end.

KELEMEN: Pompeo wants a U.N. system to interdict Iranian ships to stop them from arming proxies in the region. But you need partners for this, says Mara Karlin, a former Pentagon official who now teaches at the Johns Hopkins School of Advanced International Studies.

MARA KARLIN: And the profound unpredictability of this administration makes it really hard to get allies, partners, frenemies, onboard, especially when you’re asking them to do things that can be painful.

KELEMEN: European diplomats say they share Pompeo’s concerns about Iran’s missile programs and its support for proxies in Syria, Yemen, Lebanon and elsewhere. But privately, they worry that the U.S. doesn’t have a strategy beyond reimposing sanctions. And that also worries Ali Vaez of the international Crisis Group, an organization working to prevent wars.

US envoy insists pressure on Iran will persist under Biden

Iran nuclear deal could be key to resolving region’s conflicts