Qassem Soleimani’s role in a political crisis in Iran highlights the influence of the leader of the Revolutionary Guards’ Quds Force, who has acquired celebrity status at home after being largely invisible for years. 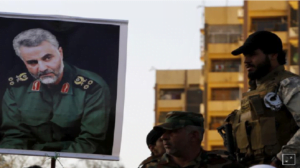 The resignation of Foreign Minister Mohammad Javad Zarif last week was quickly rejected by President Hassan Rouhani, but a week on, tension over Zarif’s absence from meetings with Syrian President Bashar al-Assad that Soleimani attended is still evident.

Soleimani’s Quds Force, tasked with carrying out operations beyond Iran’s borders, shored up support for Assad when he looked close to defeat in the civil war raging since 2011 and also helped militiamen defeat Islamic State in Iraq.

Its successes have made Soleimani instrumental to the steady spreading of Iranian influence in the Middle East, which the United States and Tehran’s regional foes Saudi Arabia and Israel have struggled to keep in check.

Khamenei made Soleimani head of the Quds Force in 1998, a position in which he kept a low profile for years while he strengthened Iran’s ties with Hezbollah in Lebanon, Assad’s government, and Shi’ite militia groups in Iraq.

In the past few years, he has acquired a more public persona, with fighters and commanders in Iraq and Syria posting images on social media of him on the battlefield, his beard and hair always impeccably trimmed.

“Soleimani is an operational leader. He’s not a man working in an office. He goes to the front to inspect the troops and see the fighting,” said an Iraqi former senior official who asked not to be identified discussing security issues.

An Iraqi militia released a music video in 2014 praising Soleimani’s efforts in fighting Islamic State, and state media have run multiple accounts of his role in military victories.

“His chain of command is only the Supreme Leader. He needs money, gets money. Needs munitions, gets munitions. Needs materiel, gets materiel,” the Iraqi former official said.