Reyhaneh Jabbari could escape execution? – An Iranian woman facing a death sentence in a murder case that some have labeled a miscarriage of justice may be spared the gallows, Iranian judicial officials said.

Authorities were seeking consent from the family of the victim to vacate the capital judgment against Reyhaneh Jabbari, according to an Iranian judiciary spokesman, Gholam Hussein Mohseni Ezhei, who made the comments Monday at his weekly news conference. 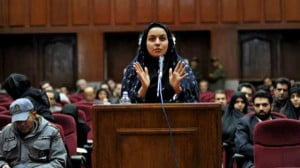 Meanwhile, the semi-official Iranian Students News Agency quoted the nation’s justice minister, Mustafa Pourmohammadi, as saying that the hanging of Reyhaneh Jabbari would be put off for at least 40 days.

Observers said the comments likely meant that Iranian authorities had decided to commute the death sentence for Reyhaneh Jabbari, whose case has been widely circulated on various social media forums. It was not clear if Reyhaneh Jabbari could face more prison time if spared execution.

Fears that her execution was imminent were raised late last month when she was moved to another prison, but then quickly returned to her original lockup.

Reyhaneh Jabbari was arrested in 2007 and sentenced to death in 2009 for the murder of Morteza Abdolali Sarbandi, a doctor and former Intelligence Ministry employee, according to a report by Human Rights Watch. The New York-based rights watchdog has called on Iranian authorities to cancel the execution.

The case against her is murky, defense lawyers say. Reyhaneh Jabbari admitted stabbing Sarbandi in the neck, but said that he had attempted to assault her sexually, Human Rights Watch said. She also asserted that a “third person” may have been responsible for the death, according to Human Rights Watch.

Her lawyers have contended that the case was not properly investigated and that Jabbari did not receive a fair trial.

Reached via cellphone, Jabbari’s attorney, Parisa Ghanbari, said, “God willing, I will get a pardon from the victim’s family and save her life.”

A friend of Reyhaneh Jabbari described the prisoner as “very depressed and hopeless.”
In another controversial legal case in Iran, Yeganeh Salehi, a jailed Iranian journalist, has been released on bail, her family said Monday. She and her husband, Jason Rezaian, Tehran correspondent for the Washington Post, were arrested in July and had been held without formal charges.

Rezaian, who holds both Iranian and U.S. citizenship, remained in jail. Media freedom groups have called on Iranian authorities to release the couple and other journalists jailed in Iran.

No information on condition of Baha’i family arrested last month

Abuse of Baha’i prisoner and refusal to grant leave

Medical furlough for labor activist Mohmmad Jarahi has been denied

Cyber Attacks: 50% Of Those Hit Are Hit Monthly, And Iran Hits Hardest Of All