The Iranian regime has ratcheted up its threats against the US and its rivals in the Middle East. A senior Islamic Revolutionary Guard Corps (IRGC) commander last month warned that the American military presence in the Gulf is a target 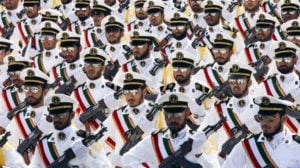 Amirali Hajizadeh, head of the IRGC’s aerospace division, said: “An aircraft carrier that has at least 40 to 50 planes on it and 6,000 forces gathered within it was a serious threat for us in the past, but now it is a target and the threats have switched to opportunities.”
Gen. Morteza Qorbani, an adviser to Iran’s military command, followed this up by warning of the secret weapons it claims to possess. “America is sending two warships to the region. If they commit the slightest stupidity, we will send these ships to the bottom of the sea along with their crew and planes using two missiles or two new secret weapons,” he said.
Although it is Iran’s senior military generals who are currently escalating their threats of war in the region, in the past other regime loyalists have done the same. For example, Ali Reza Farqani, the editor-in-chief of Iran’s Arman newspaper and a former prime minister who previously warned of mass kidnappings and the killing of US citizens, last year emphasized in an editorial that Iran “needs a foreign war” and that “war is a blessing.”
Nevertheless, it is crucial to point out that such threats are mostly political posturing and a tactic for psychological warfare because issuing threats of direct war is not an uncommon phenomenon in the context of the Iranian regime’s political discourse.
The regime’s modus operandi is not to launch a direct war but to deploy third parties, such as its militias, proxies

On 3rd of January a news spread in social media regarding Qasem Soleimani and AbuMahdi Mohandes who has died by a US drone strike near Baghdad Airport and this was the end of their lives. In social media, especially Iranian users, there was a chaotic situation, some called of “the general of... END_OF_DOCUMENT_TOKEN_TO_BE_REPLACED