The Iranian-backed terrorist organization Hezbollah, “has no respect for human life—whether Muslim, Christian or Jewish,” Joshua S. Block, CEO and President of The Israel Project, wrote in an op-ed published by JNS on Wednesday, as he warned that Israel has no choice but to preemptively defend its border with Lebanon. 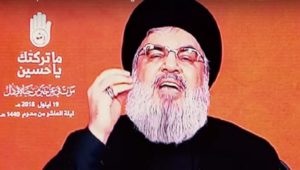 Reflecting on the strategy that prompted Israel to launch Operation Northern Shield last week to expose and neutralized cross-border attack tunnels, Block noted last year that Hezbollah uses “civilians as human shields and intentionally operates from within urban centers to maximize civilian casualties in any future conflict with Israel.”

The first of several attack tunnels discovered by the IDF originated under a civilian building in Kfar Kila, a city in southern Lebanon. According to Block, this is “proof of Hezbollah’s tactic to use civilian infrastructure to protect its military buildup.” He explained that if the IDF had not destroyed the tunnel, Hezbollah could have cut offMetula, the most northern town in Israel, from the rest of the country.

UN Security Council Resolution 1701, which ended the 2006 war between Israel and Hezbollah, stipulated that there be no armed groups in Lebanon except for the Lebanese Armed Forces.

Consequently, Block argued, Israel had no choice but to act in self-defense because Hezbollah, which exercises complete political and military control over Lebanon, wanted to seize parts of Galilee and, as part of their operation, carry out kidnappings and atrocities inside Israel. He also warned that “Hezbollah is believed to possess an arsenal of at least 130,000 rockets and missiles capable of striking virtually anywhere in Israel.”

To illustrate the severity of the threat, Block cited an interview The Israel Project had conducted with a resident of Metula, Michael Mezeika.

On the Pretext of Hossein Derakhshan’s Sentence