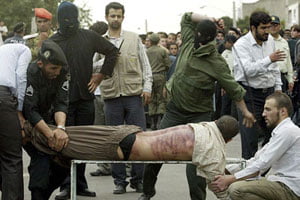 Two Iranian photojournalists have been sentenced to 75 lashes for making ‘insulting remarks’ about a book by a local official in the regime’s province of Qazvin.

The Voice of Qazvin reported on August 13: “Based on a ruling by the Branch 102 of the General Court of Qazvin, one defendant was sentenced to 25 lashes and another photographer to 50 lashes.”

Human rights group Amnesty International said in a recent statement that the sharp increase in the number of arrests, prosecutions and imprisonment of independent journalists in Iran shows that the mullahs ‘have widened the circle of repression in a bid to crumple any aspirations for change’.

Hassiba Hadj Sahraoui, Deputy Middle East and North Africa Program Director at Amnesty International, added: “The way journalists are being treated puts everything journalism should stand for at risk in Iran.

“Anyone deemed critical of the authorities has been at increased risk of arrest and prosecution in recent months, creating an intense climate of fear where voicing any criticism has become a direct road to prison.”

Since Hassan Rouhani became the regime’s president a year ago, human rights violations including execution, public hanging and the carrying out inhumane punishments such as flogging have intensified.

According to official statistics published by the regime’s judiciary during the holy month of Ramadan, at least 200 people were lashed in Qazvin province alone.

Two men also were also flogged in public on Wednesday in a city near the country’s capital Tehran for ‘disrupting public order.’