The United States will send 1,000 additional troops and more military resources to the Middle East amid soaring tensions with Iran, the Pentagon announced Monday. 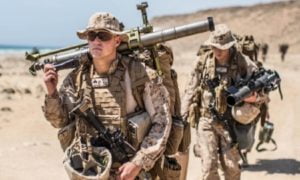 Acting Defense Secretary Patrick Shanahan said in a statement that the troops were being sent “for defensive purposes to address air, naval, and ground-based threats” in the region.

“The recent Iranian attacks validate the reliable, credible intelligence we have received on hostile behavior by Iranian forces and their proxy groups that threaten United States personnel and interests across the region,” Shanahan noted, adding that the “United States does not seek conflict with Iran.”

The Pentagon released new photos that it said showed Iran was behind the attack last Thursday on two tankers near the Strait of Hormuz, a vital shipping route for the world’s oil supplies. The images show the country’s elite Islamic Revolutionary Guard Corps (IRGC) – designated by the United States as a foreign terrorist organization in April – removing an unexploded mine from the Japanese-owned Kokuka Courageous.

The photos follow the earlier release of a video, which the U.S. military’s Central Command said showed an Iranian patrol boat removing a suspected limpet mine from one of the vessels’ hulls.

The BBC reported that the small patrol boats are typical of the type used by the IRGC navy forces in the region. “In recent years, the IRGC Navy has steadily supplanted Iran’s conventional navy all along Iran’s Gulf coast, from its border with Iraq in the north all the way down to Pakistan and the Arabian Sea,” security corresponded Frank Gardner observed. “Its forces have built up a formidable flotilla of small, high-speed, hard-to-detect attack craft armed with mines, missiles, torpedoes and drones.”

The British government also said responsibility for Thursday’s attacks “almost certainly” lies with Iran. The United States and Arab allies have blamed the country for a similar attack on four vessels off the coast of the United Arab Emirates on Sunday, May 12.