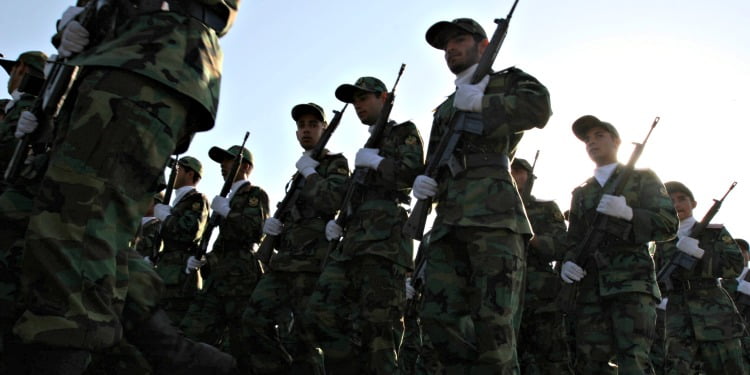 On June 18, the Islamic Revolutionary Guard Corps launched missiles at Syrian opposition bases. While Iranian officials previously said that their missiles could strike with 10 meters accuracy, it is unclear the damage done. Still, the Iranian missile strike on Syrian territory suggests that Iranian capabilities are more real than rhetorical. Iranian leaders, for their part, said their enemies should be on notice. “The spilling of any pure blood will not go unanswered,” an IRGC statement read.

Much of the debate about the direction of the Islamic Republic of Iran revolves around its military ambitions in the wake of the Iran nuclear deal. While both partisans and non-proliferation experts debate the wisdom and effectiveness of the so-called Iran nuclear deal, one issue about which there is increasing consensus is that Iranian authorities have received a tremendous windfall, much of which has resourced Iran’s military machine.

While there is much political and diplomatic attention to Iran’s ballistic missile work, Iran’s indigenous weapons program, and its attempts to purchase weapons platforms abroad, there is considerably less attention to broader issues of how Iranian military leaders think.

Matthew McInnis, a former Iran hand for the Defense Intelligence Agency and U.S. Central Command and a colleague of mine at the American Enterprise Institute (AEI), has tried to address these basic questions in a new report, “The Future of Iran’s Security Policy.”

With regard to Syria—the focus of most concern about Iran today—McInnis asks, “If Washington had better understood Tehran’s capacity for expeditionary warfare and degree of commitment to Damascus sooner, it would have gained the tools to craft much wiser policy in the conflict.”  While many predicted that Iran would involve itself deeply in Syria—especially when it faced no credible U.S. redline—McInnis seeks to elucidate the broader questions of “how Tehran approaches the use of force, deterrence, proportionality, and escalation calculus” and “how the leadership thinks about strategy, doctrine, and military capabilities.” These are all excellent questions, too often ignored in the diplomatic and strategic debates about the Islamic Republic of Iran.

To answer them, McInnis offers an overview of Iranian strategic culture, addressing points often forgotten, such as the prolongation of the Iran-Iraq War after the initial Iraqi invasion was rebuffed. He argues that Iran’s conventional doctrines are “overwhelmingly defensive” even as its offensive doctrines utilizing proxy forces are far more aggressive. He then seeks to ask how the Islamic Republic views war, how it decides to use its military, and how it understands deterrence, and how it calculates escalation and de-escalation, and how it understands retaliation. He lastly concludes by examining whether Iran will seek structural changes for its military in the wake of the nuclear deal, with special focus on procurement and production.

McInnis’s efforts to create a model for Iranian decision-making are also a useful template upon which to advance analysis and debate, even if future debates and the exploitation of new sources might cause their revision. Still, the notion that Iranian decision-making can be crystallized in a power point is an American conceit. It ignores the fact, first, that key personalities might trump institutions and, second, that institutions remain constant and do not rise and fall as the Supreme Leader on down engage in bureaucratic shuffling to better control and constrain.

While McInnis emphasizes consensual decision making inside Iran, the same evidence he cites could also more persuasively support the notion that the Supreme Leader operates by veto power, allowing Iranian officials to do whatever they have not expressly forbidden from doing. The dictator-by-veto model enables the Iranian leadership to avoid accountability. Overreliance on simulations and war games can also be counterproductive because they can affirm rather than resolve biases. This is a common problem in U.S. Central Command and among military analysts more broadly, especially in a culture where so much projection and mirror-imaging occurs. That does not mean that scenario building cannot be illustrative, but there is danger in drawing overly broad conclusions from war games.

The idea that Iran that has not started a conventional war against its neighbors for 300 years is demonstrably false; that it has become conventional wisdom in Washington is bizarre. The Iranian decision about how to intervene in Lebanon was also more complicated than portrayed, at least according to the Iranian ambassadors in Lebanon who helped craft the policy (and later talked to Asharq al-Awsat). To focus only on Iran’s opportunism in Lebanon and Bosnia ignores the ideology at the core of Ayatollah Khomeini’s revolution. To answer the question about how Iran attempts to end conflicts without addressing the late Peter Rodman’s narrative about why Khomeini reversed course on the initial U.S. hostage crisis misses key insights.

Nevertheless, at a time when think tank reports are a dime a dozen, “The Future of Iran’s Security Policy” is one that stands out and should be read and debated by anyone concerned about the Iranian threat.

Female Political Prisoners at Gharchak: “We Call Upon Those With A Conscience To Speak Out Against An Affront on Human Dignity”

Ahmad Daneshpour Being Rejected for Furlough