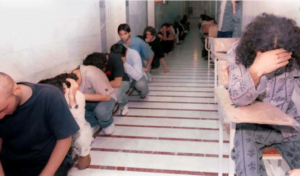 The Abdurrahman Boroumand Center for Human Rights in Iran (ABC), an international human rights organization, has accused Iran of hiding facts about the dire conditions in prisons across Iran amid the deadly coronavirus pandemic.

The ABC’s new report, published on Wednesday, September 2, on its website, is based on testimonies presented by dozens of inmates, attorneys, and informed sources in various Iranian prisons.

“Hygienic conditions in Iranian prisons, rather than improving, have significantly deteriorated” since April, the ABC report says, which accuses Iran of not releasing data showing the coronavirus spread in prisons, including the number of prisoners who have tested positive, been hospitalized or died of the virus.

The ABC NGO is named after an Iranian lawyer and politician who was assassinated in a 1991 Paris stabbing attack.

Following the report’s release, the executive director of the Boroumand Foundation, Roya Boroumand, told AFP that it was impossible to quantify the spread of coronavirus in Iranian jails, but that the information obtained by the ABC was troubling.

“If there is not a problem, then why don’t we know (the figures)?” Boroumand said. “We suspect that that’s really bad.”

Boroumand added that even at the height of the pandemic, Iran showed no mercy to detainees, be they political prisoners, drug users or members of the proscribed Bahai faith.

In the first months of the coronavirus outbreak in Iran, reports circulated of prisoners being granted leave, while some inmates revolted against their health conditions.However, in the past few months, the process of granting leave has been canceled, with some judicial officials and prison officials claiming that the prisoners’ condition amid the deadly virus outbreak is “under control,” though they have so far refused to provide relevant statistics or details.”In August 2020, COVID-19 raged throughout Iran and spread inside overcrowded, aging, and unhygienic prisons,” the ABC report states.

Sweden Supports Call For Full Investigation Of Iran's Torture Of Protesters Photojournalist: Iran's Photographers are Forced to Work in Secret

On 3rd of January a news spread in social media regarding Qasem Soleimani and AbuMahdi Mohandes who has died by a US drone strike near Baghdad Airport and this was the end of their lives. In social media, especially Iranian users, there was a chaotic situation, some called of “the general of... END_OF_DOCUMENT_TOKEN_TO_BE_REPLACED