Delegate: Progress in Iran nuclear talks but end ‘far away’ 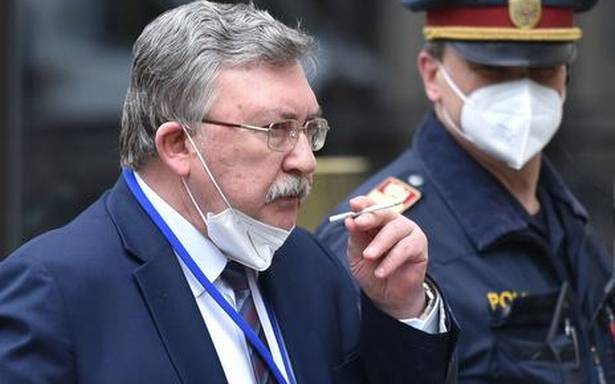 High-level talks in Vienna aimed at bringing the United States back into the 2015 nuclear deal with Iran are moving ahead with experts working on drafting proposals this week, but a solution remains “far away,” Russia’s delegate said Monday.

The U.S. unilaterally left the agreement, which promises Iran economic incentives in return for curbs on its nuclear program, in 2018 under then President Donald Trump, who said it needed to be renegotiated and imposed crippling sanctions.

In response, Iran has steadily been violating the restrictions set by the deal, by enriching uranium far past the purity allowed and stockpiling vastly larger quantities, in a thus-far unsuccessful effort to force the other countries involved to provide economic relief that would offset the American sanctions.

U.S. President Joe Biden wants to return Washington to the deal, and Iran has been negotiating with the five remaining powers — Germany, France, Britain, China and Russia — for the past two weeks on how that might take place. Diplomats from the world powers have been shuttling between the Iranian delegation and an American one, which is also in Vienna but not talking directly with the Iranian side.

Two expert groups have been brainstorming solutions to the two major issues: The rollback of American sanctions on one hand, and Iran’s return to compliance on the other.

Now, said Russian representative Mikhail Ulyanov, “we can note with satisfaction that the negotiations (are) entering the drafting stage.”

Already on Saturday, Iran’s deputy foreign minister, Abbas Araghchi, said that Tehran had proposed draft agreements that could be a basis for negotiations.

“We think that the talks have reached a stage where parties are able to begin to work on a joint draft,” Araghchi told Iranian state television. “It seems that a new understanding is taking shape, and now there is agreement over final goals.”

Read the complete article at: KPIC