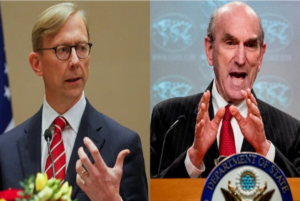 In an interview with Mehr news agency, Iranian political expert Prof. Mohammad Marandi said Brian Hook’s resignation will make the world countries more doubtful about the practicality of US’ pressures on Iran.

Last Thursday, on August 6, the US Secretary of State Mike Pompeo announced that the State Department’s special envoy for Iran Brian Hook was departing his post.

The news came somehow as a surprise regarding Hook’s anti-Iranian stances and efforts since his appointment as one of Pompeo’s top advisers in August 2018.

Hook has played a big role in the US administration after Trump’s withdrawal from the 2015 nuclear deal between Iran and the world powers, most importantly via running the “maximum pressure” campaign against the Islamic Republic.

Pompeo’s announcement of Hook’s successor, Elliott Abrams, who simultaneously serves as the US Department’s special representative for Venezuela, however, was not that much a surprise, regarding Abrams’ background.

Considered as an American veteran diplomat by his advocates, Abrams is the one with failure in leading the US-engineered coup d’état in Venezuela and his role in other US scandalous failures.

Accordingly, observers are expecting Abrams’ future moves and efficiency in helping the US with its anti-Iranian targets, given the fact that the US has been trying its best to extend Iran’s arms embargo at the United Nations Security Council (UNSC).

Iran, however, believes there is no difference between John Bolton, Brian Hook, or Elliott Abrams; when it comes to the US policies against Iran.

In an interview with Mehr news Prof. Mohammad Marandi, head of the American Studies Department at Tehran University, elaborated on the most recent substitution in the US administration.While US President Trump may leave the White House in a few months, how do you translate Brian Hook’s resignation?Whether being dismissed or persuaded to resign, stepping down of Hook is a good proof for the failure of the US ‘maximum pressure campaign’ against Iran.

On 3rd of January a news spread in social media regarding Qasem Soleimani and AbuMahdi Mohandes who has died by a US drone strike near Baghdad Airport and this was the end of their lives. In social media, especially Iranian users, there was a chaotic situation, some called of “the general of... END_OF_DOCUMENT_TOKEN_TO_BE_REPLACED