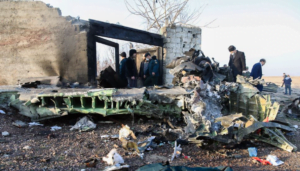 In a statement issued on Thursday, the Embassy of the Islamic Republic in Ukraine for the first time admitted that Iran has proposed a settlement to close the case of the country’s Flight PS752 which Iran’s Revolutionary Guard downed in January.

The statement says Iran is willing to resolve the issues related to the incident and “therefore, underlines that it is necessary [Ukraine] expedites its response to the proposal officially submitted to Kiev three months ago”.

The Ukrainian passenger plane was hit by two missiles shortly after taking off from Tehran’s Imam Khomeini International Airport on January 8. All 176 passengers and crew members onboard were killed in the crash. It took Iranian authorities three days to finally admit that the Revolutionary Guard was responsible for firing the missiles at the plane.

Eugene Enin, Deputy Foreign Minister of Ukraine who is in charge of the case of the crash dossier, met with the Iranian Ambassador Manouchehr Moradi on Tuesday to discuss the matter. On Thursday he told Radio Farda that Iran’s proposed MoU subjects the deciphering of the flight recorders to conditions but Ukraine has repeatedly announced that such no conditions are acceptable.

“We stress that examining the contents of the flight recorders is subject to the responsibilities that Iran has accepted in the framework of Montreal and Chicago conventions. They must submit the flight recorders to a country that can decode them if they are not able to do so themselves, Enin added.

According to Enin Ukraine demands a guarantee of implementation of international laws, explanation of the real cause of the incident — whether human error or other reasons — and punishment of those responsible for the incident.

On 3rd of January a news spread in social media regarding Qasem Soleimani and AbuMahdi Mohandes who has died by a US drone strike near Baghdad Airport and this was the end of their lives. In social media, especially Iranian users, there was a chaotic situation, some called of “the general of... END_OF_DOCUMENT_TOKEN_TO_BE_REPLACED