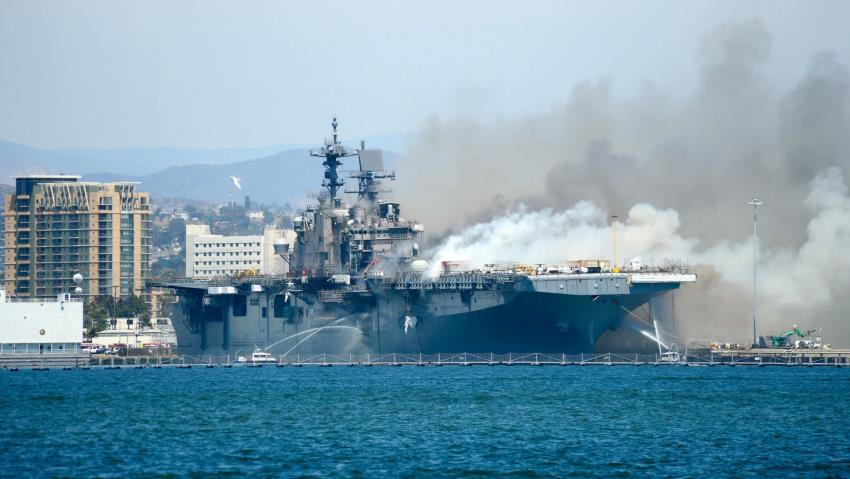 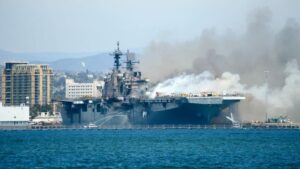 The commander of Iran’s elite expeditionary Quds Force claimed Tuesday that a fire which engulfed a US Navy warship was caused by “American elements” in response to “American crimes”, Iranian media report.

“What has happened in America today – the latest incident to be precise – is a consequence of the criminal actions and behaviour of the American nation” Iran Revolutionary Guard Corps (IRGC) Commander Isma’il Qaani told a meeting of leaders of the so-called “axis of resistance”,

The “axis of resistance” is a term that refers to an alliance formed by Iran, Syria and Hezbollah, allegedly intented to fight Israel’s and the US’ military presence in the region.

US firefighters have reportedly made progress in four days of efforts to tackle a blaze which has raged on the USS Bonhomme Richard, docked at California’s San Diego Bay.

A top Navy official said the 23-year old amphibious assault ship, which is burning at both ends, is not likely to be salvageable.

The 255-metre ship was undergoing maintenance when the fire was reported Sunday morning in a lower cargo area. It then spread rapidly from the front to the rear, with temperatures reaching up to 538 degrees celsius, causing its mast to collapse.

At least 61 people, including 38 sailors and 23 civilians, have been released from hospital after being treated for heat exhaustion, smoke inhalation, and minor injuries.

Qaani warned the US “not to blame anyone else”, suggesting that “elements” within the country were responsible for the incident. “God is punishing you with your own hands” he said.

Also Read: Is Iran’s Massive Army a Paper Tiger or a True Force to Be Reckoned With?

Maritime lawyer Rod Sullivan, who has served in the US Navy, told Associated Press that the inferno – which burned both at the stern and the bow of the ship.