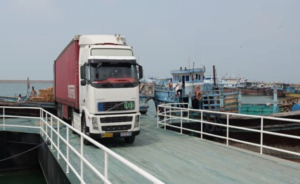 This is the second time in the current Iranian calendar year (started on March 20) that non-oil cargo is exported from Iran to Oman via Sirik Port.

Ahmad Jamaleddini put the weight of the second cargo at 22 tons, including fresh fruits and vegetables, dried nuts and mineral water, which were dispatched to the Omani port of Khasab, Mehr news agency reported.

The first cargo with a capacity of 120 tons, including mineral water and nuts, was dispatched to Oman on June 2, the official added.

In late April, Hamid Zadboum, the head of Iran’s Trade Promotion Organization (TPO), referred to the increase in trade volume between Iran and Oman and said, “Last month the two countries launched a container shipping line to transit cargoes between the southern Iranian port city of Bandar Abbas and Port Sultan Qaboos in Oman.”

“The line is used to transit container cargoes, mainly fruits, and vegetables, between the two countries,” the official said.

Iran and Oman had signed a maritime cooperation agreement in December 2019 for boosting maritime transportation between the two countries.

, Iranian traders and businessmen would be able to interact constructively with their Omani counterparts, and regular shipping lines were to be established between the two countries, while the two sides also pledged to provide facilities for using each other’s ports.Even before the container line, the two neighbors had already launched four direct shipping lines between their ports.The first shipping route between the two countries was put into operation in March 2015 between Iran’s Bandar Abbas and Oman’s Sohar.Later in December 2016, the two neighbors inaugurated direct shipping routes from two Omani ports to the Iranian port of Shahid Bahonar.

On 3rd of January a news spread in social media regarding Qasem Soleimani and AbuMahdi Mohandes who has died by a US drone strike near Baghdad Airport and this was the end of their lives. In social media, especially Iranian users, there was a chaotic situation, some called of “the general of... END_OF_DOCUMENT_TOKEN_TO_BE_REPLACED