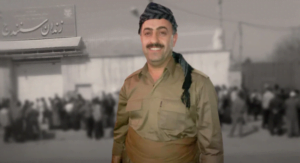 An Iranian lawyer says his minority Kurdish client is at imminent risk of being Iran’s next political prisoner to be executed following the Saturday execution of an Iranian wrestler who had joined a peaceful anti-government protest.

Speaking to VOA Persian on Monday from Tehran, lawyer Saleh Nikbakht said Iran’s Supreme Court had rejected his request to grant a retrial to his client, Heydar Ghorbani, leaving Ghorbani’s death penalty in place and enabling authorities to carry it out at any time.

Ghorbani was arrested in October 2016 in Kamyaran County of Iran’s Kurdistan province in connection with the deaths of three members of Iran’s top military force, the Islamic Revolutionary Guard Corps (IRGC), in September.

Rights activists have said Iran’s judiciary sentenced Ghorbani to death on charges including engaging in an armed attack that killed the IRCG personnel, being an accessory to murder, and being a member of the outlawed Democratic Party of Iranian Kurdistan rebel group.

In 2017, Ghorbani appeared on a program on the Iranian state network Press TV, “The Death Driver,” and seemingly confessed driving a car of DPIK rebels who authorities said were involved in the September 2016 incident.

Family members have said Ghorbani was tortured into making a false confession. Rights activists say this is a common pressure tactic used by Iranian authorities seeking to create pretexts for harsh sentences against political prisoners when other evidence of serious crimes is lacking.

Nikbakht said Iran’s Supreme Court upheld Ghorbani’s death sentence in an August 6 ruling, and on September 5 rejected the request for a retrial. The lawyer said the court informed his client of the decision on Sunday.

Iranian state media had not mentioned the Supreme Court action as of late Wednesday. But Ghorbani’s brother Hassan sent a video message to VOA Persian on Tuesday confirming that the Supreme Court rejected the retrial request and saying family members were in shock.

Also Read: Saturday showdown set as U.S. to declare UN sanctions on Iran are back

Trump eyes executive order to punish arms trade with Iran Saturday showdown set as U.S. to declare UN sanctions on Iran are back

On 3rd of January a news spread in social media regarding Qasem Soleimani and AbuMahdi Mohandes who has died by a US drone strike near Baghdad Airport and this was the end of their lives. In social media, especially Iranian users, there was a chaotic situation, some called of “the general of... END_OF_DOCUMENT_TOKEN_TO_BE_REPLACED