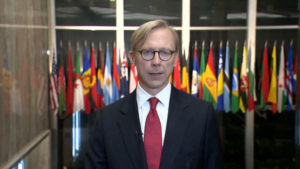 Iranian officials and media have reacted with glee to the resignation of Brian Hook as the United States’ Special representative for Iran and have angrily greeted the arrival of his successor Elliot Abrams.

The special envoy’s departure was also widely discussed in the Iranian media and social media, with some commenting that while Trump’s anti-Iran team was losing some of its fiercest members, everyone in Iran had stayed put. The reference was also about the earlier departure of John Bolton.

The spokesperson for Iran’s Foreign Ministry who usually speaks for the regime rather than the Foreign Ministry, said in a tweet that as far as the Islamic Republic is concerned, there is “no difference between John Bolton, Brian Hook, or Elliot Abrams when it comes to the United States’ Iran policy.”

Mousavi added in the harshly worded tweet: “American officials have been bitten off more than they could chew. Same applies to Mike Pompeo, Donald Trump and their successors.”

Ali Shamkhani the Secretary of Iran’s Supreme national Security Council wrote in a tweet that “the objective of the “maximum pressure” strategy has changed from regime change to preventing Iran from becoming rich! Brian [Hook] left the White House with frustration like John [Bolton]. Perhaps Mike [Pompeo] will also need to pack up his suitcase before Donald [Trump] leaves.”Alireza Mir Yousefi, Iran’s envoy to the United Nations organization had said earlier, “Hook’s resignation has nothing to do with us. It is not a determining development. The U.S. maximum pressure policy has been defeated. At the same time, this policy and those who launched it can never bring Iran to its knees.”

On 3rd of January a news spread in social media regarding Qasem Soleimani and AbuMahdi Mohandes who has died by a US drone strike near Baghdad Airport and this was the end of their lives. In social media, especially Iranian users, there was a chaotic situation, some called of “the general of... END_OF_DOCUMENT_TOKEN_TO_BE_REPLACED