Iranian Top Commander Warns Enemies of Islam to Prepare for Harsh Punishment – Chief of Staff of the Iranian Armed Forces Major General Hassan Firouzabadi warned those countries which support terrorist groups under the name of Islam to prepare for a harsh punishment.

“Today the Zionists and their hirelings are acting against Islam and Muslims and some of their allies who have hidden behind the name of the anti-ISIL coalition are practically strengthening the ISIL,” Firouzabadi said in Tehran on Tuesday. 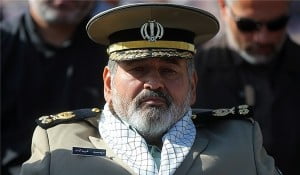 “The enemies of Islam have started a harsh game and they should prepare themselves for harsher punishments,” he added.

In relevant remarks on Monday, Iranian Deputy Foreign Minister Hossein Amir Abdollahian voiced suspicion over the real intentions of the US-led coalition in its fight against the ISIL.

Speaking in a meeting with Dutch Deputy Foreign Minister Jeir Tess, Amir Abdollahian said that Iran is suspicious at the US determination in fighting the ISIL.

He further said that the measures adopted by the US-led coalition have left no impacts on the ISIL’s stand and have further aggravated extremism.

If the US and other western governments had prevented their citizens from joining the ISIL terrorist group and asked neighbors of Iraq and Syria not to allow terrorists to use their borders, the ISIL would have been destroyed and there was no need for the coalition and such theatrical moves.

NATO heads of state convened in the Welsh city of Newport on 4-5 September and US Secretary of State John Kerry and Defense Secretary Chuck Hagel told foreign and defense ministers participating in the NATO summit that the US was forming a broad international coalition against the ISIL.

Ministers from the United States, the United Kingdom, France, Germany, Canada, Australia, Turkey, Italy, Poland and Denmark met in Wales to hammer out a strategy for battling the ISIL, but the policy was questioned by many regional officials and political leaders.

After the so-called US-led coalition against the ISIL declared its creation, Iran lashed out at the western states for pursuing a double-standard policy towards campaign against terrorism in various countries.

On 3rd of January a news spread in social media regarding Qasem Soleimani and AbuMahdi Mohandes who has died by a US drone strike near Baghdad Airport and this was the end of their lives. In social media, especially Iranian users, there was a chaotic situation, some called of “the general of... END_OF_DOCUMENT_TOKEN_TO_BE_REPLACED