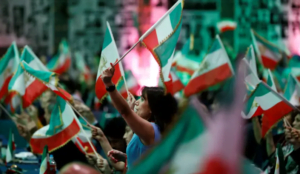 Iran is concerned about the next steps Israel and its new Gulf partners will take in the wake of the Abraham Accord signed in Washington on Tuesday.

Tehran’s displeasure is difficult to measure, but the overall context and hints in pro-Iranian media give away the sense that the regime and its allies and proxies in the Middle East view the potential Saudi-Israel relationship with concern.

Iran has been zig-zagging between hyperbolic condemnation of the UAE and Bahrain for working with Israel and trying to ignore the setback that its threats have caused.

Iran’s threats and its attempt to leverage the Iran Deal of 2015 so it can act with impunity throughout the region have fueled the Israel-Gulf relationship.

Iran believed incorrectly that it had a blank check after the JCPOA signing to basically take over the Middle East.

It sent drones and missiles in increasing numbers to Yemen in 2015, forcing Riyadh’s hand and bringing Saudi Arabia and the UAE into Yemen’s civil war.

The kingdom didn’t want an Iranian-backed proxy on its doorstep.

Once Saudi Arabia was in Yemen, the Iranians rapidly increased production of technical assistance for the Houthis.

Soon, ballistic missiles and drones were raining down on southern Saudi Arabia and even targeting Riyadh.

But Iran wasn’t satisfied even with this apparent accomplishment. It targeted Saudi Arabia’s oil pumping station at Al-Duadmi in mid-May 2019 using drones allegedly sent to Kataib Hezbollah in Iraq.

Also Read: A NEW LOOK AT IRAN’S COMPLICATED RELATIONSHIP WITH THE TALIBAN

Then Iran ordered the Houthis to strike at the Shaybah oil field near the UAE border. The attack was a message and it was sent in August 2019.In September 2019, Iran went one step further, using 25 drones and cruise missiles to attack Saudi Arabia’s Abqaiq facility. Iran, for some reason, has believed that the more it attacks Saudi Arabia.

On 3rd of January a news spread in social media regarding Qasem Soleimani and AbuMahdi Mohandes who has died by a US drone strike near Baghdad Airport and this was the end of their lives. In social media, especially Iranian users, there was a chaotic situation, some called of “the general of... END_OF_DOCUMENT_TOKEN_TO_BE_REPLACED