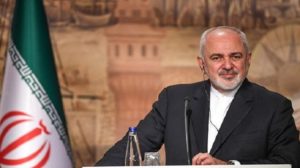 In a tweet, Zarif posted a list of recent Iranian efforts to salvage the deal with European signatories in the wake of the US exit, and linked them to statements about Tehran’s nuclear program made by Prime Minister Benjamin Netanyahu and recent reports detailing Mossad’s role in thwarting alleged Iranian plots in Europe.

In his post Zarif noted news of Mossad’s “Iran nuke file discover” in April (the reveal of a daring operation in Tehran where Israeli agents seized a trove of documents on Iran’s covert nuclear weapons program) was closely followed by the US announcement it was quitting the accord.

He further noted that claims Mossad had foiled an “Iranian bomb plot” in France were made on the same day Iranian President Hassan Rouhani visited two European nations in June.

In the most recent example, Zarif noted that Israeli intelligence last week was credited with “foiling [an] Iranian assassination plot” in Denmark on the same day the European Union was set to announce a mechanism for Tehran to skirt renewed US sanctions.

“Incredible series of coincidences. Or, a simple chronology of a Mossad program to kill the JCPOA?” he posted, without offering further explanations.

On Tuesday, Danish Security and Intelligence Service said it uncovered an Iranian plot to assassinate three Iranian opposition members living in the Scandinavian country. A day later, Israeli officials said the Mossad tipped of their Danish counterparts about the plot, which led to the arrest of Norwegian national of Iranian origin suspected of spying on behalf of the Iranian government.

Iran immediately rejected the accusation, with Zarif claiming the allegations were part of an Israeli-led “false flag” operation to undermine the Islamic Republic’s global standing.

The Danish revelations of the Tehran plot followed the unveiling of another suspected Iranian plot to target a Paris rally by an opposition group in June. According to Israeli reports, the Mossad helped thwart that attack as well, which led to the arrest of several Iranians in Europe, including a diplomat.

US President Donald Trump has cited Iran’s support for terror around the globe as a reason behind his decision to pull out of the 2015 nuclear deal and reimpose sanctions, most of which kick back into effect next week.

On 3rd of January a news spread in social media regarding Qasem Soleimani and AbuMahdi Mohandes who has died by a US drone strike near Baghdad Airport and this was the end of their lives. In social media, especially Iranian users, there was a chaotic situation, some called of “the general of... END_OF_DOCUMENT_TOKEN_TO_BE_REPLACED