Iran's Mullahs Can See Their Destiny Acted Out in Venezuela

His name is Touraj Esmaeeli, and you haven’t heard it before.  And yet, he’s a big story.  He worked as a top advisor to the Iranian intelligence service, as an expert on that country’s cyberwar against the United States and other Western countries. 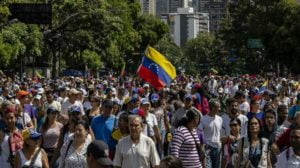 Several of his colleagues have been arrested since last spring, accused of spying, but the spybust hasn’t been widely covered. Esmaeeli scooted off to Istanbul, where he first checked in to a hotel and then barely escaped a combination of Iranian and Turkish agents who had come to arrest him.  He has taken refuge in a Western consulate.  He is said to have hundreds of documents in his possession, and the regime is said to be changing its cyber warfare methods to protect against the documents being exploited by its Western enemies.

Perhaps we will learn more, perhaps not.  But we already know enough to conclude that Khamenei and his fellow thugs in Tehran have real security problems.  The defection of Esmaeeli is a bad sign for the Islamic Republic.  It shows that they cannot trust their top people.

The unreliability of their own security forces is an inevitable outcome of the failure of the Khamenei regime, and this offers opportunities to Western intelligence services.  Even an organization like the CIA, whose failures in Iran will some day fill the pages of insiders’ tell-it-all books, has no doubt feasted on the opportunities for recruitment. It certainly looks like Esmaeeli had his documents well prepared, knew where to go in Istanbul, and was one step ahead of his pursuers.