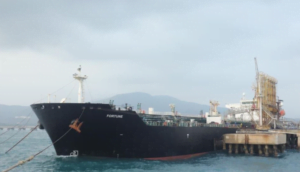 Before the United States imposed sanctions in 2018, Iran used to export 2.5 million barrels per day.

Reuters has also reported that Iran’s oil production dropped to 1.9 million BPD last July. That is half the volume before the U.S. sanctions and is used domestically or stored.

Iran has more than 120 million barrels of unsold crude stored on land and oil tankers anchored in the Persian Gulf.

Based on Kpler data, the average daily export of Iranian oil in the first seven months of 2020 was 223 thousand barrels per day.Iran exports oil only to China and Syria. China’s customs statistics show that it did not import oil from Iran in June, but Kpler data reveals that the Iranian tanker Giessel delivered its cargo to Chinese ports on June 13 with two million barrels.An informed source, who did not want to be named, told Radio Farda that the cargo was delivered to China disguised as “Indonesian oil.”Kepler statistics also show that Iran shipped 60,000 barrels of oil per day to Malaysia in the first five months of the year, but Malaysian customs data show that these shipments did not enter the country. The is further evidence that the shipments might have been diverted to China as Malaysian oil.Reuters had earlier reported that Venezuelan oil shipments were also going to China under “Malaysian” oil.Kpler’s new report shows that the total oil exports of OPEC members by sea reached 17 million 757 thousand barrels per day in July, which is an increase of 576 thousand barrels compared to June.Reuters report also shows that Saudi oil production increased by 850,000 barrels last month compared to June.OPEC’s total oil production last month reached 23.32 million BPD.

On 3rd of January a news spread in social media regarding Qasem Soleimani and AbuMahdi Mohandes who has died by a US drone strike near Baghdad Airport and this was the end of their lives. In social media, especially Iranian users, there was a chaotic situation, some called of “the general of... END_OF_DOCUMENT_TOKEN_TO_BE_REPLACED