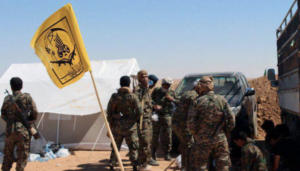 Serlak was “defending the Zeinab shrine” when he was killed last Sunday, Fars News reported on Tuesday, without providing additional details.

The IRGC has faced increasing Israeli airstrikes over the past two months, especially in April and early May, resulting in the deaths of a number of its fighters.

Abolfazl Sarlak, a commander of Iran’s Islamic Revolutionary Guard Corps (IRGC), has been killed in Syria, Iranian state media reported. Iran’s state news agencies have given conflicting reports on how Sarlak was killed. The semi-official Mehr news agency said he was killed by an explosive trap set up by ISIS in eastern Aleppo on Sunday, while the semi-official Fars news agency said he was killed during clashes with “terrorists” in the town of Khanaser in Aleppo.

Sarlak had been fighting “takfiris” in Syria and Iraq “for years,” Mehr said. Iran uses the term “takfiri” to refer to Sunni groups it deems extremist. Sarlak had been living in Aleppo with his wife and two children, the official IRIB news agency said, adding that he had an “important role” in the IRGC’s headquarters in Aleppo.

The commander was close to slain commander Qassem Soleimani, according to the Iranian media. Soleimani, who headed the Quds Force – the overseas arms of the IRGC – was killed in a US airstrike at Baghdad’s international airport in January.

Following news of Sarlak’s death, IRGC-linked accounts on social media shared an undated image showing him with the new head of the Quds Force Esmail Ghaani.

On 3rd of January a news spread in social media regarding Qasem Soleimani and AbuMahdi Mohandes who has died by a US drone strike near Baghdad Airport and this was the end of their lives. In social media, especially Iranian users, there was a chaotic situation, some called of “the general of... END_OF_DOCUMENT_TOKEN_TO_BE_REPLACED