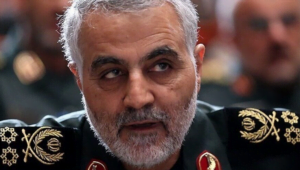 Prior to his death in a U.S. drone strike in Iraq in January, IRGC commander Qassem Soleimani wrote a letter to Muhammad Deif, the commander of the Izz ad-Din al-Qassam Brigades, Hamas’s military wing, promising him that Iran would never abandon Palestine, “the pearl of the Islamic world.”

In the letter, published on the the website of the Al-Mayadeen television channel, the Iranian commander conveyed his greetings to Hamas’s fighters and to the Palestinian people as a whole, and promised them that Iran would not abandon them under any circumstances.

He added that “the death knell of the invading Zionists will soon be heard,” and expressed hope to die as a martyr for the sake of Palestine.

The letter is further evidence of the close relations between Iran, which calls for the annihilation of Israel, and Hamas, and in particular of the ties between Soleimani and Deif.

It should be noted that Hamas officials have recently made many statements in praise of the Iranian regime and its ties with their movement. On May 20, for instance, in a speech on the occasion of Quds Day—a day of solidarity with Jerusalem and the Palestinians marked by Iran on the last Friday of Ramadan—Ismail Haniyeh, the head of Hamas’s political bureau, said that “Iran has never hesitated to support the resistance and assist it financially, militarily and technologically.”

On 3rd of January a news spread in social media regarding Qasem Soleimani and AbuMahdi Mohandes who has died by a US drone strike near Baghdad Airport and this was the end of their lives. In social media, especially Iranian users, there was a chaotic situation, some called of “the general of... END_OF_DOCUMENT_TOKEN_TO_BE_REPLACED