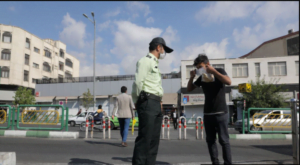 The commander of the Islamic Revolution Guards Corps (IRGC) of Greater Tehran Mohammad Reza Yazdi, announced the formation of a special coronavirus-related unit called “Enjoining the Good and Forbidding the Evil.”

The unit will deal with people who are inattentive to observing health protocols in public places, said Brigadier General Yazdi, who commands the Tehran province’s IRGC forces. Tehran

US Has to Pay Price for Crimes: IRGC General Turkey's TRT World chief was suspect in police probe into Iran's IRGC network

On 3rd of January a news spread in social media regarding Qasem Soleimani and AbuMahdi Mohandes who has died by a US drone strike near Baghdad Airport and this was the end of their lives. In social media, especially Iranian users, there was a chaotic situation, some called of “the general of... END_OF_DOCUMENT_TOKEN_TO_BE_REPLACED