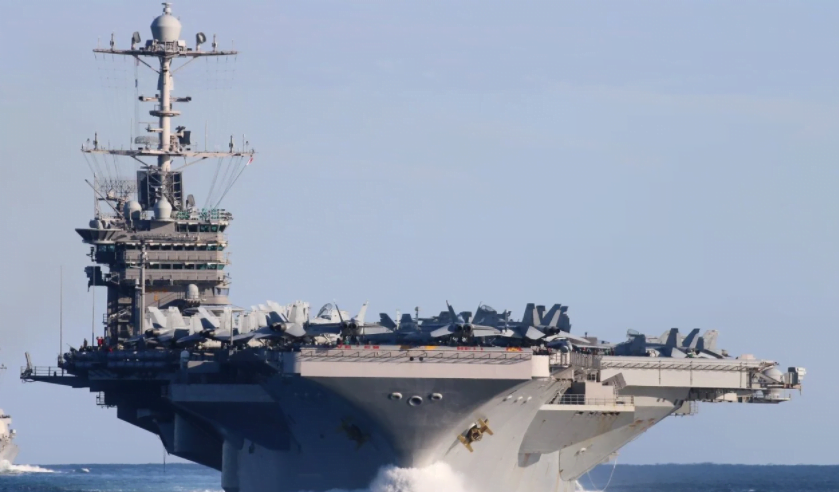 Warships capable of carrying aircraft are used by navies around the world, but to date, the Iranian Navy isn’t one of those countries that operate a carrier.

The closest that the Islamic Republic of Iran has come to building an aircraft carrier is to “simulate” an American carrier as a weapons test platform.

It was used in the February 2015 “Great Prophet IX” exercises and again this past summer in similar exercises.

Embarrassingly for the IRGC-N, the faux carrier proved difficult to sink – that is until it floundered in waters in the channels near the Iranian naval base at Bandar Abbas.

Now, Tehran could be inching closer to developing a true carrier.

The Associated Press reported this month that the IRGC-N reportedly launched a heavy warship that was capable of carrying helicopters, drones, and missile launchers.

From the photographs that have been released online, it appears to be a large cargo vessel rather than a true warship.

The vessel, which was named after the “martyred” Guard Naval Commander Abdollah Roudaki, was photographed carrying truck-launched surface-to-surface missiles and anti-aircraft missiles. It lacks anything resembling a flight deck and instead has a flat section mid-hull that has been designated as a landing pad for a helicopter. It looks less like a carrier than the First World War era warships that were converted into carriers.According to IRGC-N claims, the Abdollah Roudaki is 150 meters or about 492 feet in length, and displaces some 400 tons – significantly smaller than the 332 meters (1,092 feet) length of an actual Nimitz-class aircraft carrier, and still roughly half the length of the America-class amphibious assault ships.