Oct 25, 2019 Politics, Slider Comments Off on Lebanon’s crisis is caused by Iran

The Lebanese scene has always been part of the great regional playing field, and it has been used by the region’s powers. It has become almost monopolized by Iran through its proxy Hezbollah and forces loyal to the Syrian regime. 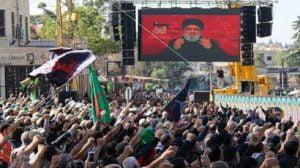 The US, too, has increased its activity in Lebanon with the imposition of sanctions on Iran. The Americans realized that they have to stifle the routes through which Tehran evades sanctions, and its most prominent route is Lebanon.

Washington has stepped up its crackdown on Hezbollah’s financial resources, tracing them to Latin America, Africa, Australia and elsewhere.

These financial resources are derived from drug trafficking, cigarette smuggling, and even selling fake Viagra.

In the past decade, Tehran has used Hezbollah and made it carry out missions beyond Lebanon’s borders. Iran has turned Hezbollah into a military battalion fighting on its behalf in Syria, Iraq, Yemen and elsewhere.

Tehran has also turned Lebanon into a propaganda, legal, political and financial center in its service. To do that, Hezbollah seized almost complete control of the state — the airport, ports, border crossings, telephone networks, security and service ministries. This is why the US made Lebanon the target of its scrutiny and sanctions, and there might be further pressure.

On 3rd of January a news spread in social media regarding Qasem Soleimani and AbuMahdi Mohandes who has died by a US drone strike near Baghdad Airport and this was the end of their lives. In social media, especially Iranian users, there was a chaotic situation, some called of “the general of... END_OF_DOCUMENT_TOKEN_TO_BE_REPLACED