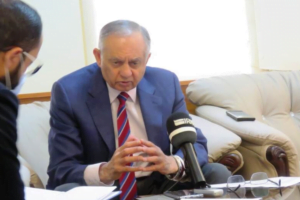 Pakistan’s Advisor to the Prime Minister on Commerce and Investment announcing his participation in the upcoming 9th meeting of Iran-Pakistan Joint Trade Committee, to be held in Tehran, says that Pakistan is determined to take trade relations with Iran to the highest level.

Abdul Razak Dawood a senior politician and a well known business personality made the remarks during an exclusive interview with IRNA on Saturday.

After the formation of the incumbent government of Pakistan, he was appointed as Prime Minister Imran Khan’s Advisor on Commerce and Investment.

He has served as Minister of Commerce in the cabinet of former Pakistani military ruler Pervez Musharraf from 1999 to 2002. In May 2019, he and Pakistani Prime Minister Imran Khan paid a two-day visit to Iran, during which he met with Minister of Industry and Trade Reza Rahmani.

The Advisor to the Prime Minister hosted the Iran’s Minister of Industry and Trade and delegation in Islamabad in mid-July last year, and the two countries held detailed talks on deepening trade and economic relations in the 8th round of the Joint Trade Committee.

Abdul Razak Dawood during the interview said he is looking forward to next Iran-Pakistan Joint trade Committee meeting and hopefully it would be held in the first week of October.

“Yes I will represent Pakistan in the next joint trade committee meeting in Tehran,” he noted. Pakistani Advisor

He said we have many ideas to enhance trade with Iran which we will discuss when the next joint trade committee meeting will be held.

He added that at the conclusion of the 8th Joint Trade Committee hosted by Islamabad we signed an MoU to enhance bilateral trade adding that Pakistan is willing to export more rice to Iran.

On 3rd of January a news spread in social media regarding Qasem Soleimani and AbuMahdi Mohandes who has died by a US drone strike near Baghdad Airport and this was the end of their lives. In social media, especially Iranian users, there was a chaotic situation, some called of “the general of... END_OF_DOCUMENT_TOKEN_TO_BE_REPLACED