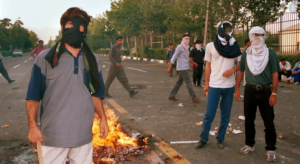 Friday July 9, 1999 was the hottest day for students in Tahran as their anti-government protests were met by the iron fist of the Revolutionary Guard. It remained in memories as Iran’s student movement, but it marked a watershed after which disillusionment with the Islamic Republic gradually deepened and the era of popular protests began.

Everything started on July 6 when the Judiciary banned the country’s leading reformist daily newspaper Salam, under pressure from the Intelligence Ministry for publishing a confidential letter by its notorious deputy Saeed Emami to the chief of intelligence. Emami was proposing restrictions on media freedoms, including the establishment of a media censorship organization.

He had earlier sent a similar document to Majles, Iran’s Parliament, which was discussing an amendment to the media law when Emami’s letter arrived. Deputy Speaker Majid Ansari refused to read out the letter at the podium. However, Salam published the letter the next morning and the Judiciary banned it.

At the time, all the reformist papers published the news of the ban and protested the decision. Nonetheless, the Majles passed Emami’s amendment.

Thousands of university students took to the streets of Tehran in protest to the ban on Salam. The daily’s managing editor was Mohammad Musavi Khoiniha, the man who called on Supreme Leader Ayatollah Ali Khamenei just two weeks ago to acknowledge his responsibility for the failure of the Islamic Republic.

As the students refused to go back to their classes or the dormitory, things led to violence. Eyewitnesses still remember young men and women in cages mounted on vans being taken to jail.

Police Chief Mohammad Baqer Qalibaf, IRGC’s elite commander Qassem Soleimani and 14 other officers wrote a letter to reformist President Mohammad Khatami, warning that they would open fire at the students if they did not stop their protest.