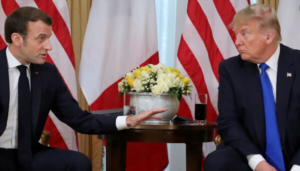 The White House said in a statement on August 7 that President Donald Trump spoke with his French counterpart, Emmanuel Macron, about the recent explosion in Beirut and the extension of Iran’s arms embargo.

In a tweet on Friday, the Special Assistant to the president and the White House Deputy Secretary, Judd Deere, said the two leaders expressed their deep sadness over the loss of life and extensive devastation in Beirut.

Deere also announced that President Trump and President Macron discussed the importance of extending the UN arms embargo on Iran.

However, the White House official did not provide further details on talks between the U.S. and French leaders over Iran’s arms embargo’s expiration.Secretary of State, Mike Pompeo, said on Wednesday that the United States would call for a vote in the UN Security Council next week on extending Iran’s arms embargo.Quoting diplomats at the United Nations, Foreign Policy reported on Friday that the proposed U.S. resolution would be presented to the Security Council next Monday and would be voted on Tuesday.According to Bloomberg, the resolution text is the same as the one the U.S. tabled less than two months ago. Therefore, it shows that the Trump administration has ignored requests by other signatories of the Iran nuclear deal to amend the resolution.Bloomberg says the resolution calls on UN members to refrain from any arms trade, selling or buying, with the Islamic Republic.The resolution also calls on all countries to refrain from providing Iran with technical training, financial resources or services, advice, or assistance in the supply, sale, transfer, manufacture, maintenance, or use of weapons.Nevertheless, U.S. ambassador to the UN, Kelly Craft, said on August 5 that China and Russia are likely to veto the resolution.

On 3rd of January a news spread in social media regarding Qasem Soleimani and AbuMahdi Mohandes who has died by a US drone strike near Baghdad Airport and this was the end of their lives. In social media, especially Iranian users, there was a chaotic situation, some called of “the general of... END_OF_DOCUMENT_TOKEN_TO_BE_REPLACED