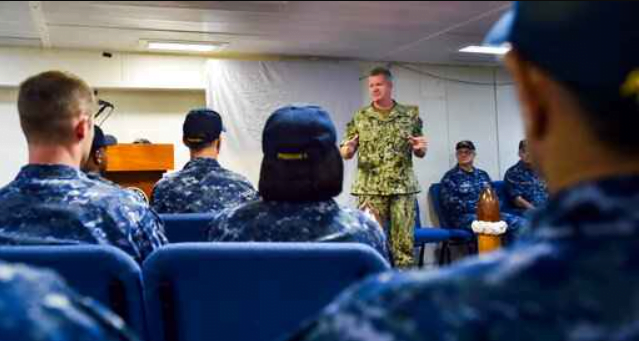 The top U.S. Navy official in the Mideast said Sunday that America has reached an “uneasy deterrence” with Iran after months of regional attacks and seizures at sea, even as tensions remain high between Washington and Tehran over the Islamic Republic’s nuclear program.

Vice Adm. Sam Paparo, who oversees the Navy’s 5th Fleet based in Bahrain, struck an academic tone in comments to the annual Manama Dialogue hosted by the International Institute for Strategic Studies.

He described having a “healthy respect” for both Iran’s regular navy and the naval forces of its paramilitary Revolutionary Guard.

“But I have found Iranian activity at sea to be cautious and circumspect and respectful, to not risk unnecessary miscalculation or escalation at sea.”

While Iran has not directly seized or targeted a tanker in recent months as it did last year, a mine struck an oil tanker off Saudi Arabia and a cargo ship near Yemen came under assault in recent days. Suspicion immediately fell on Yemen’s Iranian-backed Houthi rebels for being behind both attacks. The Houthis have not commented on either.Paparo, a former Navy fighter pilot who most recently served as director of operations at the U.S. military’s Central Command, offered a different stance than his immediate predecessor, Vice Adm. James Malloy. In one of his last comments to the journalists in August, Malloy referred to Iran as “reckless and provocative” and always trying in dramatic naval drills to “lower the denominator until they’re sure that they can look like they’ve won something.”

Iran’s proxies in Iraq threaten US with more sophisticated weapons

In an alarming move, the IRG demands that prisoner Saeed Malekpour make another televised confession