Using digital tools, the IRGC strengthens its grip on power in Iran

Oct 16, 2020 adminayesha IRGC News, Slider Comments Off on Using digital tools, the IRGC strengthens its grip on power in Iran 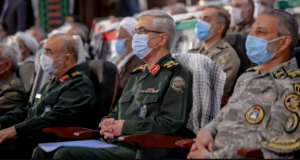 Using digital tools, the IRGC strengthens its grip on power in Iran

As tensions between the U.S. and Iran continue to mount as Washington looks to further ratchet up pressure on Tehran, Iranian cyber activities have been in the spotlight in recent weeks.

U.S. authorities have cracked down on Iranian cyber actors as part of a wide-ranging campaign, going after everything from website defacement to intellectual property theft and imposing targeted sanctions.

Over the past decade, Iran has made a concerted push to expand its cyber capabilities, an effort in which the Islamic Revolutionary Guard Corps (IRGC), the branch of the Iranian military charged with safeguarding the 1979 revolution against internal and external threats, has played a central role.

The IRGC reports directly to Supreme Leader Ayatollah Ali Khamenei and acts as the eyes and ears of the ruling clergy throughout all corners of the country, spying both digitally and physically on its own citizens. Given the IRGC’s expansive and growing power, scholars, analysts, and many Iran watchers have long thought that at some point it could take over control in Iran, replacing the theocratic government with a military one.

As Iran approaches an inflection point over the issue of succession after Ayatollah Khamenei, that day could be coming soon, and the IRGC is well placed to bring about such a transition given the hybrid mix of physical and cyber capabilities that it has developed and perfected over recent decades.

The IRGC has played a key role in cracking down on protests and curbing dissent in Iran whenever they reach critical mass.

This was on clearest display during the 2009 Green Movement when the IRGC crushed the opposition to the contested electoral victory of former President Mohammad Ahmadinejad.

Hossein Dehghan Could Win Iran’s Presidency For The Revolutionary Guards Many Israelis Ready To Spy For Iran, IRGC Commander Says

On 3rd of January a news spread in social media regarding Qasem Soleimani and AbuMahdi Mohandes who has died by a US drone strike near Baghdad Airport and this was the end of their lives. In social media, especially Iranian users, there was a chaotic situation, some called of “the general of... END_OF_DOCUMENT_TOKEN_TO_BE_REPLACED