U.S. Secretary of State Mike Pompeo, declaring a national emergency because of rising tensions with Iran, announced Friday the sale of over $8 billion worth of weapons to Arab allies in the Middle East to “help these nations to deter and defend themselves from the Islamic Republic.” 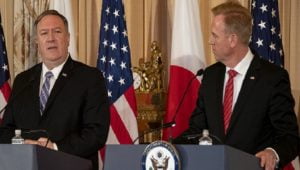 Invoking a rarely used aspect of federal law, the Trump administration notified Congress that it will complete 22 pending arms transfers to Saudi Arabia, the United Arab Emirates, and Jordan. Included in the sale are surveillance aircraft and precision guided bombs, as well as other types of ammunitions and related equipment.

In a letter to congressional lawmakers, Pompeo said he had “determined that an emergency exists, which requires the immediate sale of the defense articles and defense services” to these countries “in order to deter further the malign influence of the Government of Iran throughout the Middle East region.”

The secretary added that, “[Iran’s] activity poses a fundamental threat to the stability of the Middle East and to American security at home and abroad.”

The United States also confirmed the deployment of an additional 1,500 troops to protect U.S. interests in the Middle East, describing the move as an effort to bolster defenses against Iran after accusing the country’s elite Revolutionary Guard Corps (IRGC) of direct responsibility for attacks on U.S. allies in the region.

Earlier this month, Iranian-backed Houthi rebels in Yemen carried out multiple drone attacks on critical oil infrastructure in Saud Arabia, shortly after the kingdom said two of its oil tankers and two other vessels had been damaged in an act of sabotage off the coast of the United Arab Emirates.

Iran’s Foreign Minister, Mohammad Javad Zarif, warned Saturday that an “increased US presence in our region is extremely dangerous and it threatens international peace and security and this should be addressed.”

On 3rd of January a news spread in social media regarding Qasem Soleimani and AbuMahdi Mohandes who has died by a US drone strike near Baghdad Airport and this was the end of their lives. In social media, especially Iranian users, there was a chaotic situation, some called of “the general of... END_OF_DOCUMENT_TOKEN_TO_BE_REPLACED