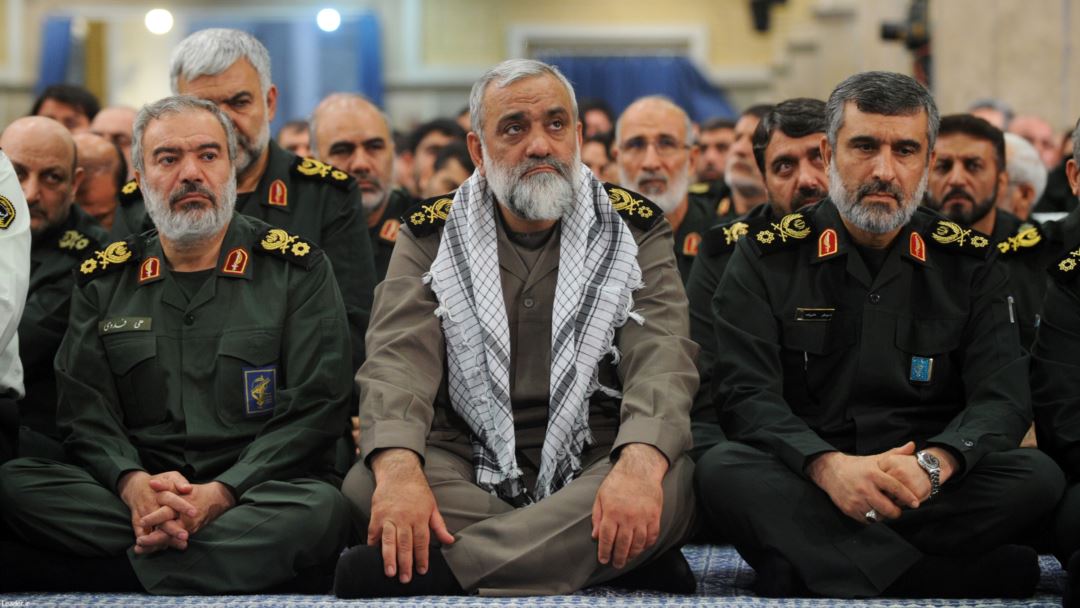 Who are the eight Islamic Revolution Guards Corps (IRGC) commanders were among Iranian officials sanctioned by the United States on Monday June 24?

The IRGC, designated as a foreign terrorist organization by the United States, controls a large part of Iran’s economy besides its main functions of suppressing calls for reforms in the country and furthering Khamenei’s regional ambitions in Iraq, Syria, Yemen and elsewhere.

Meanwhile, the U.S. Treasury, while announcing the commander’s names said that they were involved in Iran’s provocative ballistic missile development plans, and sabotage of oil tankers in international waters among other mischiefs.

According to the Department of Treasury, these generals are on top of a structure that leads IRGC’s “destructive activities” in the region. The United States generally views IRGC as an element of instability in the region.

The United States has previously sanctioned top IRGC commanders such as Qods Force’s Qassem Soleimani, former commander-in-chief Mohammad Ali Jafari and IRGC Intelligence Chief Hossein Taeb. But who are the 8 generals sanctioned on Monday and why are they important for military, economic and other reasons?

Amir Ali Hajizadeh is the commander of IRGC Aerospace Force. He is a radical hardliner and an outspoken critic of President Hassan Rouhani’s administration. He is also the man in charge of Iran’s missile development program. He has been serving in this position for 10 years since 2009, meaning that Iran’s Supreme Leader Ayatollah Ali Khamenei, who was also sanctioned on Monday, trusts him for the time being.

Hajizadeh is known for his staunch anti-U.S. remarks. He has always opposed the nuclear deal with the West (JCPOA). He has said that the main objective of Iran’s missile program is striking Israel.

Mohammad Pakpour was on the list of Iranian commanders sanctioned by U.S. even before the 2015 nuclear deal. Like Hajizadeh, he was also appointed to his post in 2009 and is a highly decorated general. Khamenei awarded him a Victory medal.

He is one of the few IRGC generals with a good academic background and a Ph.D. degree in political geography. Unlike commanders such as Hajizadeh and Tangsiri, he has not been observed to trumpet anti-U.S. rhetoric.

He was subjected to U.S. sanctions before the JCPOA, but sanctions on him were lifted after the 2015 deal.

Alireza Tangsiri is probably one of Khamenei’s most favorite commanders and one of the most radical IRGC officers. Khamenei appointed Tangsiri as the commander of IRGC in September 2018.

He is known for his staunch anti-U.S. views as well as his frequent anti-American speeches; and it is this aspect of his character that has made him popular at Khamenei’s headquarters.

Tangsiri has openly spoken about suicide missions against U.S. warships in the Persian Gulf. He has said he knows many individuals who can hit themselves, wrapped in explosives, on a U.S. ship.

He was involved in most of the cases of detaining U.S., UK, Canadian and Australian military personnel in the Persian Gulf.

During the past months, Tansiri has repeatedly threatened to close the Strait of Hormuz.

Abbas Gholamshahi has been the commander of IRGC Navy’s first region in Bandar Abbas and in charge of defending the Strait of Hormuz since 2016.

He is a career naval officer and has served as the coordinating commander of IRGC Navy’s first region before being appointed to his current post. This is a post Tangsiri left to become the commander of the entire IRGC Navy.

Gholamshahi’s unit is the closest IRGC unit to the strategic Strait of Hormuz.

Ramzan Zirahi is the commander of IRGC Navy’s second region in the vicinity of the Bushehr nuclear power plant and has held this post since 2017.

The main mission of his unit is protecting the Kharg Island oil terminal and ensuring continued oil export from that terminal.

His unit was involved in detaining 10 U.S. sailors in 2016 near the Farsi Island and one of his officers was awarded a Victory Medal by Khamenei.

Yadollah Badin is the commander of IRGC Navy’s 3rd region in Mahshahr, North of the Persian Gulf and has held this post since 2016.

The area under his command starts at Port Mahshahr and ends at the mouth of the river Arvad at the border with Iraq all along the southern boundaries of Iran’s Khouzestan Province.

Mansour Ravankar has been the commander of IRGC Navy’s 4th region in Asalouyeh since 2016. The territory under his command spans from Bandar Abbas to Bushehr and is located between the first and second naval regions of the IRGC.

The region became particularly significant since 2019 when the Iranian government attached more importance to protecting the South Pars gas fields.

Ali Ozmaei, is the commander of IRGC Navy’s 5th region in the Persian Gulf area and in charge of the security of Lesser and Greater Tunbs and Abu Mousa Islands which are the subjects of a long standing dispute between Iran and the United Arab Emirates.

The islands were part of the IRGC Navy’s region one, but in 2012 they became a new region in order to allocate more resources to the protection of the Strait of Hormuz.