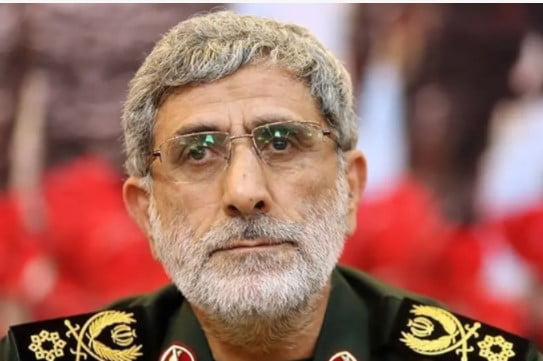 Brig.-Gen. Esmail Qaani, the commander of Iran’s IRGC Quds Force, went to Iraq on the eve of the country holding discussions with the US this week. This is clearly a symbolic visit designed to show that Iran considers Iraq part of its “near abroad” and that the US should be wary to be playing too close to Iran’s backyard. Qaani ended a two-day trip to neighboring Iraq, the Arabic-language Al-Alam news network reported today.

Qaani has struggled to take up the banner of his predecessor Qasem Soleimani since being appointed in January 2020. Soleimani was killed in a US drone strike in Baghdad. Qaani is an expert on Afghanistan but has struggled to deal with Iraqis and other Arab groups that Iran is close to. He has been sent to Iraq before and has gone to Syria.

“Citing informed sources as saying, the Iranian news channel’s correspondent said Tuesday that the IRGC Quds Force’s chief had met with a number of Iraqi officials and senior figures besides leaders of political parties and movements in the Arab country,” Iran’s Press TV said.

There isn’t much information on Qaani’s trip, but it is clear that Iran wants to show it off on the eve of dialogue between Iraq and the US. The goal here is to show that Tehran can coordinate efforts in Iraq. In the past, pro-Iranian groups there have attacked US forces, bases and supply convoys. However, attacks have been reduced in recent weeks, likely in the lead-up to the Vienna Iran deal talks with Europeans, which the US will be watching closely.

Qaani went to Iraq as Iran sent its top diplomat to Central Asia. Clearly, there is a reason for this. Work with Central Asia, where Qaani is actually an expert, is left to diplomats. Iraq is a military issue because Iran uses the pro-Iranian militias there to traffic weapons to Syria and uses Iraq as a base to threaten Israel.