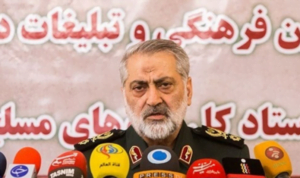 The senior spokesman of Iran’s Armed Forces has insisted that only eight Iranian servicemen have been killed in Israeli airstrikes against Iranian military bases in Syria in recent years.

An Islamic Revolution Guards Corps (IRGC)-linked news agency, Fars, cited Brigadier General Abolfazl Shekarchi as denying on Thursday, July 16, reports that “hundreds” or even “thousands” of Iranians had been killed in Israeli airstrikes in war-torn Syria.

The IRGC Brigadier General maintained that only eight Iranian military personnel have been killed in Israeli raids.

The airstrikes attributed to Israel started after the civil war broke out in 2011 in Syria and Iranian forces were dispatched to help the Assad regime and thy began establishing themselves in the country.

Also Read: Iran’s hard-liners grapple with the trap of securitizing the state

Israeli officials believe the military presence of the Islamic Republic and its proxies in Syria is a deliberate attempt “to open a new front against the existence of Israel.”Apparently, Mohammad Ali Allahdadi is the highest-ranking Iranian military personnel killed so far in the airstrikes attributed to Israel.A commander of the Qods Force, the IRGC’s arm for extraterritorial operations, 52-year-old Brigadier General Allahdadi was killed in January 2015 alongside six Hezbollah Fighters near the Israeli borders.Following his death, the IRGC released a statement saying, “Zionists should await devastating thunder of the IRGC,” and Iran’s Ministry of Foreign Affairs sent a “warning letter” to Israel via the United States, Al Jazeera reported on January 28, 2015.Jihad, the son of the Lebanese Hezbollah’s notorious field commander, Imad Mughniyeh, and several other Lebanese militias, were killed along with Allahdadi.On several occasions, the London-based Syrian Observatory for Human Rights, which monitors developments in the Syrian war, has claimed that “many” of the casualties of Israeli air attacks were Iranians.However, the Iranian armed forces’ senior spokesman dismisses the claim and insists such claims are cooked-up by the Western-Zionist media empire and their sidekicks to aggrandize Israel’s power, while it is merely a paper tiger.

On 3rd of January a news spread in social media regarding Qasem Soleimani and AbuMahdi Mohandes who has died by a US drone strike near Baghdad Airport and this was the end of their lives. In social media, especially Iranian users, there was a chaotic situation, some called of “the general of... END_OF_DOCUMENT_TOKEN_TO_BE_REPLACED