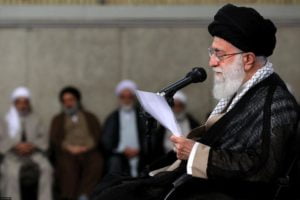 The hard-liners of Iran — primarily the Islamic Revolutionary Guard Corps (IRGC) — are using the cover of the coronavirus crisis to refurbish their image domestically by escalating tensions in the region against the US and its allies, and accelerating plans to settle islands the country unlawfully occupies in the Gulf. This worrying behavior should preclude the lifting of the UN’s conventional arms embargo in October.

The killing of Qassem Soleimani in early January and the IRGC’s inability to respond in kind shook the image of invincibility Iran’s leaders wanted to project.

A week later, the IRGC shot down a Ukrainian airliner, killing all 176 passengers and crew, causing an international uproar and further weakening that image, especially with its feeble attempt to cover it up.

Internally, many Iranians also vehemently protested, as most of the passengers were Iranian or of Iranian origin.

Those two events further tarnished the Guards’ image, which was already bloodied by their November 2019 crackdown on civilian protests throughout Iran, when they killed hundreds of unarmed protesters.

In February, the IRGC was able to engineer parliamentary elections, eliminating the little opposition that existed in the old Majlis. The hard-liners won 221 seats to the reformists’ 20, ensuring a rubber-stamp assembly.

Having secured a commanding majority in parliament, the hard-liners are not much worried about the second round of parliamentary elections in September.

However, they are training their eyes on next year’s presidential election to ensure a hard-liner victory.

Equally important, they are gearing up for the battle of succession to the frail Supreme Leader Ali Khamenei — an event that could happen at any time because of incapacitation or death.

On 3rd of January a news spread in social media regarding Qasem Soleimani and AbuMahdi Mohandes who has died by a US drone strike near Baghdad Airport and this was the end of their lives. In social media, especially Iranian users, there was a chaotic situation, some called of “the general of... END_OF_DOCUMENT_TOKEN_TO_BE_REPLACED