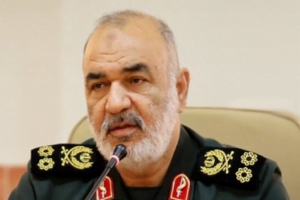 Commander of the Islamic Revolution Guards Corps Major General Hossein Salami warned that Iran’s response to any threat to its vital interests would not be confined to a specific region.

The IRGC would not restrict its activities to a specific geographical region when it comes to protecting Iran’s security and vital interests, Major General Salami said on Thursday, after unveiling the IRGC’s first oceangoing warship.

“If anybody seeks to threaten the interests of this great (Iranian) nation and country, they will definitely find no safe spot on Earth,” the commander warned.

He further highlighted Iran’s success in playing a prominent and unique role in ensuring security in the Persian Gulf, which he said has strategic importance to the world economy. The commander then elaborated on the IRGC’s defense strategy that is coupled with offense tactics, cautioning the enemies that any threat or act of aggression will turn the IRGC into a fully offensive force. The IRGC Navy’s defense capabilities cover a broad range of tactics such as combat in close range, close combat in faraway areas, and remote combat, the commander noted. On the Rudaki oceangoing warship that has joined the IRGC Navy, General Salami said the vessel is used for defense, logistical support, and ensuring the security of Iran’s navigation routes in the region and abroad. The new warship, 150 meters in length and weighing 4,000 tons, is a multipurpose vessel for long-range operations. It is furnished with missiles, air defense systems, and radars. Rudaki warship has been equipped with a 3-dimensional phased array radar, sea-to-sea and sea-to-air missiles, advanced communication systems for electronic warfare, and the ‘Khordad 3rd’ missile system. The military vessel is capable of carrying helicopters, drones, and attack boats.