Israel-UAE deal: Iran and Turkey must form a united front 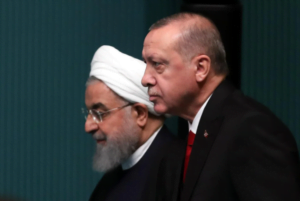 Israel-UAE deal: Iran and Turkey must form a united front

The UAE-Israel peace agreement, which will be formalised on 15 September, will have a massive impact on the geopolitics of the Middle East in the long term.

Framed primarily as a counter against Iranian influence in the region, the first peace deal between Israel and an Arab Gulf country goes much further than that.

Unlike Israel’s previous peace agreements with Egypt in 1979 and Jordan in 1994, which remained at the formal state level and did not enable deeper penetration of society, the rapprochement with the UAE brings Israel into the heart of the region.

By developing political, economic, and cultural capital in the UAE, Israel potentially gains the ability to influence events across the region, in relation to Yemen, other Gulf states, and even Iraq.

In that context, the deal is very bad news for Turkey and Qatar, the two states at the forefront of developing an alternative ideological-security regional architecture distinct from the conservatism of other Arab Gulf states, Egypt, and Iran’s so-called Axis of Resistance.

To prevent the UAE-Israel alignment from gaining game-changing strategic momentum in the years ahead, Iran, Turkey, and Qatar will have to work more closely together, aligning not only their politics and economies but crucially their strategic postures as well. Israel-UAE deal

Turkey views Iran as a regional rival, but this mindset will have to change; otherwise, an alliance between Arab conservatism and Israeli expansionism may well establish a strategic advantage in the not-too-distant future. There is little doubt that Iran has the most to lose from the UAE-Israel rapprochement – even more than the Palestinians. Despite Emirati protestations that the deal is not aimed at Iran, the Islamic Republic has identified the deal as a major threat to its regional strategic interests.The Islamic Revolutionary Guard Corps (IRGC) issued a strongly worded statement describing the deal as “historical foolishness” and “clear treason”, noting that it would accelerate Israel’s “annihilation”. Supreme Leader Ayatollah Ali Khamenei echoed these sentiments, lambasting Emirati leaders for their “treason” and expressing confidence that the deal “will not last long”.

On 3rd of January a news spread in social media regarding Qasem Soleimani and AbuMahdi Mohandes who has died by a US drone strike near Baghdad Airport and this was the end of their lives. In social media, especially Iranian users, there was a chaotic situation, some called of “the general of... END_OF_DOCUMENT_TOKEN_TO_BE_REPLACED