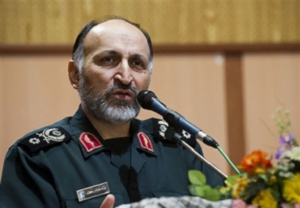 Saying criminal Trump must pay the price for all barbaric crimes, including the assassination of Lt. General Qassem Soleimani.

Addressing a cultural ceremony on Friday evening, Brigadier General Mohammad Hejazi said the US is on the decline in all fields, pointing to US presidential candidate Joe Biden’s admission that Donald Trump’s policies have weakened the US’ position.

The criminal US president claims that his cruel measures, such as the assassination of Lt. General Soleimani, have made the US safer, the commander added. If the US has become safer, then why are the American forces shaking with fear in their bases and why is Washington begging for more time in its message for Iran, General Hejazi asked. Criminal Trump wrongly believes that the US is safe after committing the atrocities, but he has to pay the price for all crimes, the Iranian commander warned. In a meeting with Iraq’s prime minister in July, Leader of the Islamic Revolution Ayatollah Seyed Ali Khamenei warned the United States that Iran will definitely reciprocate the assassination of Lt. General Soleimani. The Leader underlined that the Islamic Republic of Iran will never forget the American assassination of the top commander in Iraq and “it will definitely deal the reciprocal blow to Americans.”On January 3, a US drone strike near Baghdad International Airport assassinated General Soleimani, former commander of the Quds Force of Iran’s Islamic Revolution Guards Corps. The attack — that also killed Abu Mahdi al-Muhandis, the second-in-command of Iraq’s Popular Mobilization Units (PMU) anti-terror group, along with several others— came while General Soleimani was on an official visit to the Iraqi capital.