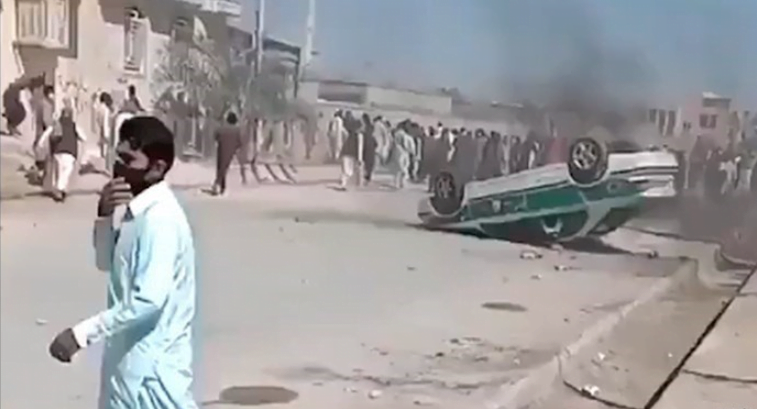 The people of different cities in Iran’s Sistan and Baluchestan province held protest rallies and strikes today, protesting the killing of fuel porters and demonstrators in the province’s Saravan county.

The protests follow the killing of Baluch fuel porters by Revolutionary Guards (IRGC) forces on Monday at a border crossing near Saravan.

On Wednesday, the people of the Kourin Sarjangal region near Zahedan city protested despite the heavy presence of IRGC forces.

Also Read: Netanyahu: Israel will prevent a nuclear Iran whether or not a deal is in place

The people are demonstrating in support of the people of Saravan. Despite the dense presence of security forces, the protesters set tires on fire and blocked the road between Kourin and Zahedan. The protesters stood their ground against IRGC forces who opened fire on them. Security forces were firing on the people from the rooftops of an IRGC base. In response, the protesters attacked and occupied the base, causing the security forces to flee. According to reports, the IRGC has sent dozens of special forces vehicles to Kourin to suppress the protesters. According to the latest reports, security forces across Sistan and Baluchestan are on full alert. In Zahedan, security patrols are circulating across the city. At the same time, people in several cities across Sistan and Baluchestan have gone on strike in protest to the IRGC’s killing of fuel porters and protesters. In Saravan, the Bazar and several shops across the city have shut down. In Zahedan and Sarbaz, the people have closed their shops. In Sarjangal, there were protest rallies in several places across the city. The people have declared their solidarity with the people of Saravan.On Monday, repressive Revolutionary Guards.